Crime Thrillers are perhaps the single most common genre in writing – thus, impressing the readers in this genre is perhaps the most difficult of all. And, in addition to the above, if you have an author who has not only managed to impress the reader, but also carve a niche for herself, then the pull of both this, the current book, as well as the forthcoming titles, becomes even more alluring. And this is exactly what the author of the current book, Ms Neena Brar, has managed to achieve in the pages of this book from her pen – Tied To Deceit… 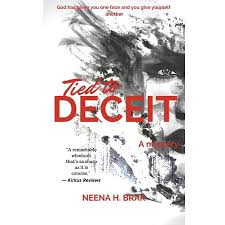 THE BOOK
This is a murder mystery, with a twist; or – to be more accurate – with several twists, to be very precise. A lady receptionist gets killed at her home – a simple, seemingly, whodunit, isn’t it? Well, not quite. Apparently, this lady receptionist has an affair with the Lead Doctor. I know – still simple. And, the wife catches the good healer, our Doctor. Yup, still straightforward. Except for one detail – she doesn’t just happen to stumble onto the cheating Doc by chance; she gets an anonymous letter from someone.

Who sent this anonymous letter? And more to the point, why? With what motive? The couple have no children; only one nephew, who knows he has it {the money} coming to him. Said nephew is also in the same hospital, incidentally the couple’s hospital, and there are no contenders either. The only motive can be the affair, apparently. Problem: Solid alibis of the couple; established. Complicating matters is the nature of the deceased…

THE ANALYSIS
Rarely has a murder mystery been so intense, so involved in its narrative; I was surprised by the intensity of the narrative used. This went very well indeed with the backdrop of the crime it was dealing with, lending it added credence and power. The style makes an instant connect with the reader from page 1, quite literally, as it pulls you in, even before the facts begin to pour in. This narrative style is unique for this genre so far as I can recall.

The character development is par excellence; the author has delivered a credible, instantly connectable set of strong well defined characters you can relate with. The character set before you seem increasingly thoroughly logical as their actions are revealed. Add to this the devotion of sufficient {but not too much} time and space to background development, and the entire edifice of the character plot makes a strong impression. These characters stay with you long after you finish the book.

The combination of these three aspects – a complex and involved plot full of twists & turns, plus the narrative style, plus the character plotting, is topped off by the icing on the cake : and that is the investigative phase, which is handled with surprising and remarkable aplomb. This phase floored me totally. Involved, painstaking, full of proper investigation and deep interrogations – each paragraph in its proper deserved place. Miss even a page, and  you miss the flow of the story. Simple outstanding!

In conclusion – an outstanding crime whodunit novel that is deeply involved, with a strong set of reasons that make it thoroughly entertaining. It is a medium-paced book – that is neither nor too slow. This set of 5 factors {story, narrative, characters, pace, plot} allows you to fully connect with the story, keeping you glued to the pages. I rate it 5 stars on  5; one of the best in this genre I have read. I look forward eagerly to other contributions from the pen of Ms Neena H Brar….

Popular posts from this blog

PK : A Movie Ahead Of Its Time;A Movie That Is A Very Vital And Current Need!
I dont normally review movies; my blog does not lend itself to such an activity, given its positioning as one that asks some tough questions to Indians. I am making an exception for this movie, not because it is a landmark movie {which it is}, but because this movie is also one that asks some pretty blunt, and to some people, offensive questions.
It is rather sad and humbling to see the vigorous protests to this movie, and some cases of active on-street protests and interference in some places. Sad, because there is almost nothing in the content that should excite such actions; and humbling because it is a painful reminder that we as a nation have still a ways to go in our quest for true development!
Before I move onto the movie, I have just one question : did the protesters also protest to Haider? If no, you did not find the negative portrayal of The Indian Army objectionable? That was great Cinema? Showing …
5 comments
Read more

Book Review : India 2020 - A Vision For The New Millennium


The KarmYog, or, as it is called at its culmination point – Nishkaam Karmyog, is a path towards God wherein a person acts as per the situation, without any self-interest, dedicated towards God, and without any expectation of return. As per the Krushnaarjun Samvaad {also known as the Shrimad Bhagwad Geeta}, it is a state where one is purely content in the self and at total peace. At its highest point, Nishkaam Karmyog, there is no need for a person to act

THE VARIOUS PATHS TOWARDS MOKSH The KarmYog path is one that can take you to liberation despite being in Gruhasthaashram, or in other words, while being in society, marriage and friends; another path for the Gruhasth is SanyasYog, wherein one practices detachment while remaining in the sansaar -different from Sanyaas Aashram when one renounces the world. A third path is BhaktiYog – wherein one is so devoted to God, that one literally forgets oneself.