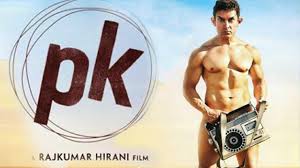 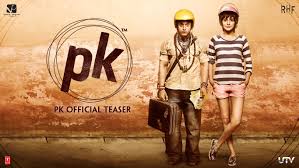 PK : A Movie Ahead Of Its Time;

A Movie That Is A Very Vital And Current Need!

I dont normally review movies; my blog does not lend itself to such an activity, given its positioning as one that asks some tough questions to Indians. I am making an exception for this movie, not because it is a landmark movie {which it is}, but because this movie is also one that asks some pretty blunt, and to some people, offensive questions.

It is rather sad and humbling to see the vigorous protests to this movie, and some cases of active on-street protests and interference in some places. Sad, because there is almost nothing in the content that should excite such actions; and humbling because it is a painful reminder that we as a nation have still a ways to go in our quest for true development!

Before I move onto the movie, I have just one question : did the protesters also protest to Haider? If no, you did not find the negative portrayal of The Indian Army objectionable? That was great Cinema? Showing our beloved Armed Forces in a negative light is art, and acceptable? Asking questions of the Army based on excesses is ok, despite the negativity? And asking anything from our Religion is NOT ok? So which is more important - Hinduism, or India?

THE MOVIE
The movie is about an Alien who is stranded on this planet; as it happens, his "remote" to contact his ship to come collect him is stolen on his landing. The rest of the movie is about his hunt for the remote, and his adventures as he goes about it. It is a hard-hitting expose on human nature and modern life, or what we call civilization. And, as we shall see, the movie ends with a punch to the gut, which leaves you almost feeling ashamed of being a human being on Earth. The movie gives you pride in being a Hindu, or to be accurate, a Sanaatan Dharmi; but it makes you feel ashamed to be a Human Being living on this planet, all in just one shocking dialogue, that takes your breath away, and leaves you retching in sheer disgust at humanity.

The Alien, who has been given no name, is from an advanced race that does not speak, but communicates with telepathy. Thus, they are unable to lie, or practice chicanery in any form. And this poor fellow is loose in a land full of lies and uncaring people. {Close your eyes, and imagine this scene for a moment; imagine his desperation!} When people, unable to understand, tell him - ask God - he begins to question, who is this God? And gets directed to a Temple, as this is the most populous in India. He asks God to return his Remote to him, and sits in the Temple, waiting for God to give it back to him - since that is what he sees people do : ask God, do this and do that for me!

He then sees people doing all sorts of penance - Flowers, Milk, Chaader on a Muslim Peer Tomb, Churches - and he does all of this. He sees people donate money to the Temple, and blindly follows this. And then, when obviously no result is obtained, doesnt get angry - unlike us. He just assumes that God is missing from these places of Worship, and distributes placards and posters with images of all Gods of all Religions, asking "Missing", if anyone finds God, please contact me!

Religion is only one of the two or three themes of the movie; to be sure, it is a predominant theme - but it is one theme among two or three nonetheless. And the picture is not about Hinduism, it is about Religion, blind faith, loot, lies and chicanery. It just so happens that first, we Hindus are the majority in this nation. Other religions have also been covered.

Second, can anyone imagine the reaction if such hard questions were asked of Islam? Or, to an admittedly much lesser extent, Christianity? Recall the protests to The Da Vinci Code? Or the various problems in the Islamic world? Is it really feasible to ask such hard questions of Islam? Thus, isnt it a matter of tremendous pride for us Sanaatan Dharmis that we are followers of an open faith, where such questions can be asked?

The movie then acquires a compelling and rapid narrative, as PK gets mixed up in politicised religion, and gets pitted against a powerful so-called Godman. Also mixed in is a lovely India-Pakistan love story that will tug the strings of your heart. And the best part of this is that all these 3 narratives combine into one story effortlessly and naturally.

Hats off to you, Team PK! Sad that so many people have not understood its core message... there are some movies with a message. And then there are some messages with a movie woven into them, like PK. A landmark movie... stupendous. Stupendous! We need more such movies, and more such courageous actors and directors and artists... take a bow, Team PK! Stunning! Superlative! One of the best motion picture features to come out of Mumbai!

I say it again : Strange that Haidar does cause even a ripple, with its negative portrayal of our beloved Armed Forces, and PK with its questions on so many vital aspects of life can cause an uproar! Is the nation more important or the religion? I am an INDIAN first. Did not watch Haidar, do not intend to. No one insults my Army. Sorry. And PK is much, much deeper...

An Alien comes to this planet, and the only thing he learns from this planet and from us Humans... how to lie; while teaching us the true meaning of love... A matter of some pride, isnt it, that the only thing we can teach an Alien is the art of lying???? Thus, after thousands of years of development, of civilization, that is all we can teach someone? Shame on us...

Popular posts from this blog

Book Review : India 2020 - A Vision For The New Millennium

March 27, 2016
INDIA 2020 – A VISION FOR THE NEW MILLENNIUM BY DR. A P J  ABDUL KALAM & DR Y S RAJAN This is perhaps one of the best known books penned on India’s Growth Imperatives in its search for developed country status, penned by one of India’s favourite sons-  our beloved Late Dr APJ Abdul Kalam, Former President, Nuclear Scientist – and, as it turns out, thinker extraordinaire with a tremendous passion for India and all things Indian.  It has been co-authored with Dr Y S Rajan, who used to be the Scientific Secretary to the office of the Principal Scientific Adviser to the Government of India. He was also associated with ISRO and the Department of Space This book, as it turns out, is far more than a mere problems/challenges-and-solutions stuff... it is the dream of a great Indian, a man who had given his entire life in the service of the nation. It is in every way a vision, a passionate dream; but one that is well presented, sorted out, supported with extensive res
8 comments
Read more

Book Review: Tell Me Why Magazine

January 25, 2012
Tell Me Why is the name of a rare gem of a magazine from the house of Manorama... it is indeed unfortunate that it is not more popular... but more about that later First, the magazine itself. It is a monthly issue which gives 100+ facts about one single chosen topic every month. Sounds very drab and boring, doesn't it? It is, in fact, anything but drab. The beauty is in the presentation as well as the content. The presentation is very slick, upmarket, printed on quality paper, the layout very brisk and to the point with full colour features on every single page. That alone makes it sound interesting. If you add to it the content, it becomes a superb magazine. So much so, that while we throw away the other magazines - this is one that is carefully stored away as a future reference material, fun reading and most importantly reading material for our son when he is old enough to understand. The real beauty is in the content: it is simpe in its wording, the facts mentio
11 comments
Read more